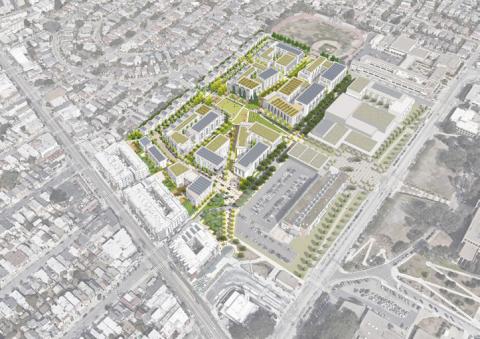 San Francisco, CA –The San Francisco Public Utilities Commission (SFPUC), the Planning Department, and the Office of Economic and Workforce Development (OEWD) are pleased to announce the selection of a development team to partner with the City to transform and bring new housing and open space to the Balboa Reservoir. The selected team for the 17-acre property will be led by AvalonBay Communities and BRIDGE Housing. The partnership includes Pacific Union Development Company and nonprofit partners, Mission Housing and Habitat for Humanity for Greater San Francisco.

“This team brings tremendous experience building quality affordable and mixed-use housing, working thoughtfully with local communities, and successfully tackling large and complex projects. They are a great fit for the Balboa Reservoir project, and I am confident their experience will support the City’s effort to provide affordable housing and open space in the community,” Ken Rich, Director of Development for the Office of Economic and Workforce Development.

The Balboa Reservoir site is located within walking distance of the Balboa Park BART station and the Ocean Avenue retail corridor and is adjacent to City College of San Francisco and Riordan High School. The City owns the property under the jurisdiction of the SF Public Utilities Commission (SFPUC). The Balboa Reservoir Project is part of a larger effort to utilize City-owned land to help address the City’s housing needs. As one of the largest undeveloped public sites, it represents a major opportunity to build mixed-income housing, along with open space and other community benefits. In addition, moving forward with the sale of surplus SFPUC land will benefit San Francisco water ratepayers.

“The winning proposal does an exceptional job of addressing both San Francisco’s extreme housing need and the community’s vision for the Balboa Reservoir. It presents innovative ways to achieve and exceed the development parameters, and it brings together the right group of developer partners to realize this vision,” said Harlan L. Kelly, Jr., General Manager of the San Francisco Public Utilities Commission (SFPUC).

"I want to thank the members of the Balboa Reservoir Community Advisory Committee for the countless hours they dedicated to the process. They worked diligently with our engaged community members to develop a strong set of parameters for a future development that would meet our goals for affordability, neighborhood compatibility, and family-friendly amenities. The selection of the developer is just the very beginning of a collaborative partnership with our community to ensure that this project is something we can all be proud of,” stated Supervisor Norman Yee who represents District 7 and the Balboa Reservoir area.

The AvalonBay/BRIDGE team’s winning proposal includes up to 1,100 units of affordable and market rate housing and 4.2 acres of parks and open spaces. These numbers are subject to change in response to feedback from the City and community members during the upcoming planning process. The development of the Balboa Reservoir is guided by a detailed set of parameters advised and endorsed by the BRCAC, which call for:

AvalonBay and BRIDGE will serve as the primary developer to coordinate the overall development process. They will lead a team including two additional nonprofit partners, Mission Housing and Habitat for Humanity, both of which have deep expertise in affordable housing and inclusive community outreach. Pacific Union will also use its experience in public and private development and in parking development to create a shared parking garage that will serve both residents and the City College community.

In addition to the five developers, this team’s proposal names Van Meter Williams Pollack and Pyatok as master plan architects, identifies a slate of design and engineering consultants, and names eight architecture firms that have expressed interest in designing the project’s individual buildings.

The Avalon/Bridge team was one of the three development teams that were invited to submit comprehensive proposals for the Balboa Reservoir project. The three were narrowed down from nine that applied and submitted responses to the original Request for Qualifications.  The other two shortlisted teams were: (a) a collaboration between the Emerald Fund and Mercy Housing and (b) a collaboration between Related California, Sares Regis of Northern California, Curtis Development, and Tenderloin Neighborhood Development Corporation.

The three developers presented their proposals at a community workshop in June. The proposals were also shared and posted online for public review and comment. The evaluation panel comprised of City staff and community representatives including City College then reviewed the proposals, as well as the public feedback, and recommended the AvalonBay/BRIDGE team.

The SFPUC and its commission will need to authorize entering into exclusive negotiations with this development team around its purchase and development of the property. The development team will then begin consultation with the City and community to refine its development proposal accordingly. Once the plan is finalized and completes environmental review, it will go before the SFPUC Commission, the Planning Commission, and the Board of Supervisors for approval. This process is likely to take approximately two years.

The Balboa Reservoir project is part of the Public Land for Housing program, a collaboration with the Planning Department, the Office of Economic and Workforce Development, and the City’s enterprise agency to transform publicly-owned land into housing for families and residents. More information can be found here: www.sf-planning.org/balboa-reservoir