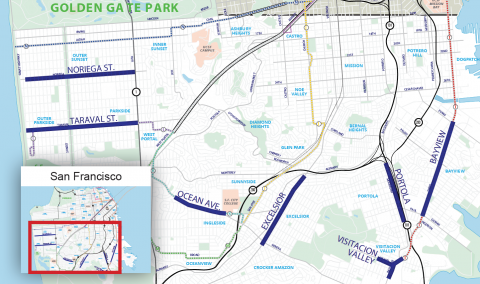 “San Francisco’s nightlife and entertainment industry is vibrant. Through SB 1285, we want to make sure that our neighborhood corridors like the Bayview, Excelsior, and others identified in this legislation, benefit from this economic vitality. I want to thank Senator Mark Leno for championing this important victory for San Francisco merchants and residents,” said Todd Rufo, director of the Office of Economic and Workforce Development.

“The cost to obtain a liquor license has become so prohibitive that many small business owners who wish to open a restaurant are unable to do so, which is a lost opportunity for communities that could have benefited from the investment,” said Senator Leno. “SB 1285 is a targeted, innovative approach to help enhance economic vitality and encourage growth in our neighborhoods that have struggled to attract new businesses.”

Under existing state law, the only way to acquire a full restaurant liquor license in San Francisco is on the secondary market, where they are currently being sold for as much as $300,000. These prices make full liquor licenses inaccessible for small business owners in many San Francisco neighborhoods, preventing entrepreneurs from opening full-service restaurants in these neighborhoods and limiting the ability of existing neighborhood restaurants to succeed and grow.

SB 1285’s neighborhood-restricted licenses will be available directly from the California Department of Alcoholic Beverage Control (ABC) at an application fee currently set at $13,800. While the licenses will be issued through the ABC’s existing application process, they will be non-transferable; when a license holder sells or closes their business, that license will return to ABC for issuance to another neighborhood restaurant. The law will also require any business seeking a neighborhood-restricted license to conduct local outreach, including a community meeting, before submitting an application.

“We lose a significant amount of business when potential guests learn they have to forego specialty cocktails if they want to host an event or dine with us. In order to continue as an anchor institution in the Bayview, helping youth get off the streets and move into their destiny, we have to be able to keep our doors open. A neighborhood-restricted liquor license would be a game changer, by helping us become a sustainable and thriving business,” said Teresa Goines, Founder & CEO of Old Skool Café in the Bayview.